Introduction to the NEW Google Sites 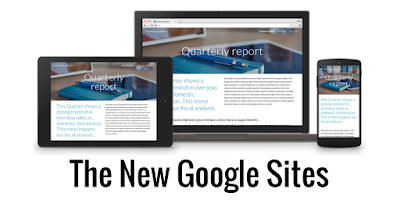 I have used Google Sites to create, not only my class web site, but also our school and district websites since 2009. For the first time since I started using this service, Google has decided to drastically update and redesign the service for modern web design.

Before Google Sites, I was using GeoCities create websites. Some of the revolutionary features of GeoCities, such as a web-based page editor, were successfully emulated in Google Sites.

So, is the new Google Sites an improvement. I would say yes. Take a look at some of the improvements I highlighted below.

Any Drawbacks in the New Google Sites?

There are some parts of the new Google Sites that are not all there yet. I suspect as Google continually updates the product, these features will be added. Here are some of the features I noticed were missing.
For those that are creating a website for the first time, this could be a great tool to use. However, when I look at the features I currently have in the old Google Sites, I believe I'll have to wait to convert.

Google is still supporting the old version of Google Sites. You can still create a Google Site in either platform at least until the end of 2017. Google announced that sometime in 2018, the goal is to end support for the old Google Sites. So there is time left for those that need time to either re-create or re-design their websites.

Tutorial of the New Google Sites